Deaths Caused by Hidden Soy in Those with Peanut Allergies Note from Jennifer: At 20 something allergies, we mainly focus on healing allergies and other chronic illnesses with nutrition. This is one time I feel that a serious allergy issue must be addressed and am honored to have Dr. Kaayla Daniel share this guest post with us.

Odwalla’s Chocolate Protein Monster made the news last April when four consumers experienced severe allergic reactions. This set off a “nationwide allergy alert”, a product recall and a lot of speculation about what might have caused the reactions.

Although all four of the victims were allergic to peanuts, and two were also allergic to tree nuts, the drink contained neither peanuts nor tree nuts. There was also no evidence of accidental or malicious cross contamination at the manufacturing plant.

With the possibility of contamination from peanuts unlikely, detectives are considering the potential for cross reactivity. Cross reactivity refers to a reaction that occurs when people allergic to one class of proteins react to another similar in structure.

A good example of cross reactivity is soy and peanuts, members of the grain-legume botanical family. In fact, scientists have known for years that people allergic to one are often allergic to the other.

Food safety experts say they are clueless as to what might have happened in the Odwalla case, but given that the Chocolate Protein Monster drink contained soy protein, and the victims all suffered from peanut allergies, the likely culprit is soy.

Soy Allergies on the Rise

Severe reactions to soy were once rare. Today they are increasingly common, and pose especially high risks to children already afflicted with peanut allergies.

In 1999, the journal Allergy reported that four children in Sweden died after eating a minuscule amount of soy “hidden” in hamburgers. The Swedish National Food Administration promptly warned parents and pediatricians of the soy-peanut link, and stated that children suffering from both peanut allergy and asthma are at very high risk.

The researchers found it took only a tiny, almost indiscernible, amount of soy to create a severe and even life-threatening reaction in susceptible individuals.

Even more surprising, they discovered severe allergic reactions could happen suddenly and unexpectedly to people with no known soy allergies. In fact, the reactions documented by the Swedes were very similar to the reactions to the Odwalla Chocolate Protein Monster drink.

Cross-Reactions May Cause Death Tragically, the Swedish National Food Administration warning has not been publicized much in the U.S.

Indeed, the Soyfoods Association of North America – and even many allergy support groups – recommend soy nut butter and soy nuts for children allergic to peanuts and tree nuts.

As a result, few people have heard of the deadly soy/peanut connection, and numerous adverse reactions have been reported.

Tragically, there have also been several deaths.

Six years ago, 13-year old Emily Van Der Meulen died on April 13, 2006. Emily had a severe peanut allergy and assiduously avoided peanuts, but did not know she should also have avoided soy. She died after eating a meal that was apparently peanut free but contained a tiny amount of soy. Just as in the Swedish study, she had not previously reacted to soy.

On February 22, the Weston A.. Price Foundation learned the sad news of the death of a nine year old girl who was allergic to peanuts but died after drinking soy milk:

“My cousin’s daughter just passed yesterday after having soy milk for the first time. She was known to have peanut allergies and asthma. My cousin watched what she ate but he was not aware of the relationship between the peanut allergy and soy. She had an asthma attack and did not respond to treatment.”

Hundreds of other mystery deaths may also have been caused by the soy-peanut connection. Indeed, it’s a question that needs to be asked whenever we hear someone with peanut allergies dies suddenly after eating a hamburger, a burrito or some other food that did not contain peanut ingredients.

The obvious question is, why so many reactions, and why now?

The main reason appears to be the increased number of allergenic proteins found in genetically modified (GMO) soy.

As reported by Robyn O’Brien on the AllergyKids website: “According to previously undisclosed research and the Peanut Genome Initiative, it appears that in the genetic engineering of soy, a soy allergen was created that is 41 percent identical to a known peanut allergen, ara h 3.

This new allergen, now found in soy, is recognized by 44 percent of peanut allergic individuals. Recent studies out of the University of London conducted by Gideon Lack support this undisclosed research and highlight the role that conventional soy (and soy formula) play in the development of the peanut allergy. . . In the United States, 90 percent of soy now contains these new proteins, chemicals and allergens.”

Why hasn’t this news gotten out?

Why do so many allergy support groups neglect to issue warnings?

Given the fact that soy ingredients are in more than 60 percent of processed or packaged foods and nearly 100 percent of fast foods, this is simply irresponsible.

Not surprisingly, the reason appears to be the usual principle of profits over people. According to Robyn O’Brien, “Leading pediatric allergists and researchers have been funded by the agrichemical corporation responsible for engineering these proteins, chemicals and toxins into soy.”

Sadly, it’s been months since the Odwalla case made the six o’clock news. As yet the culprit hasn’t been identified, and the investigative spotlight has not yet shone on soy. Right now, the best we can do is hope, pray and join the Weston A. Price Foundation, AllergyKids and other truth telling organizations and make a concerted grassroots effort to share this information with as many people as possible. 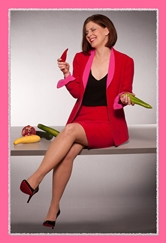 Dr. Kaayla Daniel is Vice President of the Weston A. Price Foundation and author of The Whole Soy Story: The Dark Side of America’s Favorite Health Food.

For more from Dr. Kaayla, the Naughty Nutritionist™, visit her website where she outrageously and humorously debunks nutritional myths. You can follow her blog at www.drkaayladaniel.com.