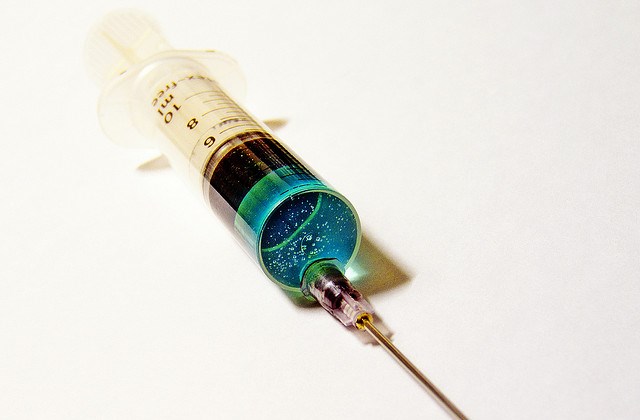 This year, influenza has swept the nation. Flu shots are being handed out in record numbers and are even being offered as part of promotional packages to encourage people to get their flu shot.

If you’re looking for a flu shot alternative, you’re in the right place.

It’s now March and people are on their second and third round or still have lingering symptoms from months ago.

Either it’s Rotovirus (stomach flu) or Influenza-A, but someone you know has it right now.

For those of you who strongly believe in the power of the flu shot, feel free to use this recipe as complimentary medicine. Just don’t attribute its effectiveness to the flu shot.

The plague tonic is absolutely safe while the flu shot is not.

Flu Shots – Not All They’re Cracked Up To Be

Many of you are concerned with the side effects and effectiveness of these preventative treatments, and rightly so.

BEHAR: Well first of all, someone want to know there`s a rumor that your kids did not get flu shots or swine flu shots is that right?

OZ: That`s true, they did not.

BEHAR: Do you not believe in them for the kids or what?

OZ: No, I would have vaccinated my kids but you know I – I`m in a happy marriage and my wife who makes most of the important decisions as most couples have in their lives.

OZ: Who absolutely refuses. And listen the kids are pretty healthy. We actually think two of them caught swine flu very early on anyway. So there`s no point vaccinating them again. And you know –

BEHAR: What do you, on that same subject, what do you think about this controversy that`s going around about vaccinations and autism and other little things that happens to kids?

OZ: I think kids like the canary and the coal mine. That they are more susceptible to some of the toxins maybe our generation was able to overcome. That`s why we have a lot more allergies now. Perhaps one of the reason why we have more autism. But I don`t think it`s just the vaccine.

It sounds like Dr. OZ has a pretty smart spouse.

You can find thousands of webpages dedicated to reasons not to get the flu shot, so we won’t rehash the whole story here. 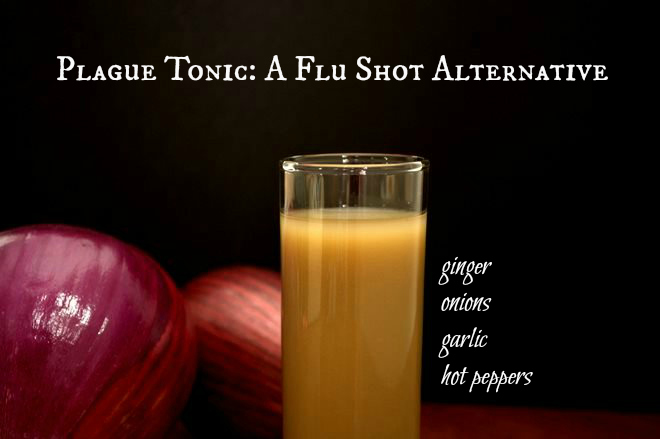 What Can I Do?

Enter the modern day plague tonic. This remedy has many variations also goes by the name of master tonic and fire cider depending on the ingredients used. It’s the strongest flu shot alternative that I know of.

My original inspiration comes from a wonderful real food ally, Pat Robinson. Her original and ever-popular post can be found here and has an alternate recipe and many tips.

Plague Tonic is the most powerful food-based antibiotic available.

My family has fought off every bug that’s come our way this winter. Hubby and I both caught the flu – fever, chills, aches, sore throat, headache, and sinus pressure – but overcame it within a few hours.

My worst symptoms this winter were from my 4 hour flu, a week of post-nasal drip and hoarseness.

You can throw every study you like my way. I trust the results.

Caution: According to a very helpful and knowledgeable herbalist, ginger in pregnancy must be used with care. Here are her comments:

I loved your recipe and plan to make a whole gallon of it. It is safe for breastfeeding mothers, but please know that ginger, especially fresh ginger, can cause a miscarriage in the first trimester of pregnancy. Although ginger used to be recommended for morning sickness, it has lately been contraindicated during pregnancy for this very reason. A good substitute would be echinacea or wild yam.

Thank you for asking, Jennifer! I advise no ginger at all for any pregnant woman during her first trimester, and then only very small amounts, if any, for the remainder of her pregnancy (except during labor, when it’s helpful to keep things moving). Although it’s true that most women can ingest a little ginger with no repercussions, with some, even having a small amount can bring on contractions and bleeding within hours. Because a woman doesn’t know if she’s prone to miscarriage or sensitive to ginger until it’s too late, and because the stakes are so high (the life of her baby), it’s just not worth the risk. Personal experience includes having had nine miscarriages myself (none of which were caused by ginger, but which led me into extensive research into miscarriage prevention) and being with a pregnant friend who began cramping and bleeding shortly after eating a salad with a small amount of grated ginger in it. It’s very potent medicine, and wonderful for preventing and treating illness; but quite dangerous for unborn babies as the ginger tends to throw the uterus into contractions. [P.S. ~ The good news is that I went on to carry seven children full term!

During acute illness: 2-4 tablespoons every 1-3 hours

Can be mixed or followed with raw, local honey to cut the heat.

This fiery remedy is antibacterial, antiviral, antifungal, detoxifying, helps break up mucous, and promotes circulation that increases the effectiveness of white blood cells.

It is a live food full of enzymes and contains important compounds to improve general health as well as during times of illness like sulfur, Vitamin C, and many phytonutrients. It is also a great digestive aid.

Share this post with at least one person – Facebook, Pinterest, e-mail, however you like – and help spread the word about this amazing remedy and flu shot alternative. People are getting bullied into thinking a flu shot is the only alternative, and they need options.

This post is part of Fat Tuesday, Family Table Tuesday