Kombucha & how to pronounce it 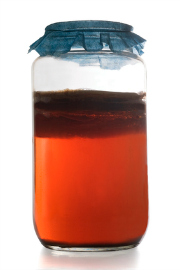 Reading a friend’s post today made me want to broach the topic of kombucha.

Many of you are familiar with it but there are a fair number not steeped in this crunchy REAL FOOD world who just said “Kombucha? Um, bless you.”

Don’t worry. We’ll uncover the mysteries of this miracle drink.

I think it best not to rehash information that most bloggers have either touched on or gone in-depth on previously.

Instead, I’m going to make this a linky link post as a reference point for everyone who could use a little more info about this amazing fermented tea.

What is kombucha and how do you pronounce it?

Kombucha is essentially sweet tea fermented with a SCOBY. A SCOBY is a Symbiotic Culture of Bacteria and Yeasts that has been handed down and shared through the generations. It is thought that the SCOBYs we use today are all related and descended from one brewed over 2,000 years ago. It is a Japanese word, and the basic pronunciation is kahm-BOOCH-ah (which is why you’ll hear people calling it ‘booch’).

Jenny at Nourished Kitchen has a wonderfully thorough post on kombucha basics.

[As a reader of this site, you’ve almost certainly heard about the fermented tea with a funny name, Kombucha. Perhaps you’ve brewed it yourself (or still do) or maybe you’ve only ever tried a store bought brand. Even if you’ve never tried it before, allow me to reintroduce you to Kombucha from the beginning and clue you in on a few secrets and tricks…The legend of Kombucha Tea stretches back thousands of years as home brewed beverage, often maintained by the grandmother and passed down through the generations. It is said to have been invented in 220BC for a Chinese Emperor, favored by Genghis Khan…Made from 3 simple ingredients – tea, sugar and water, the SCOBY transforms them into a powerful detoxifying and alkalizing tonic. Moreover, in addition to beneficial bacteria, Kombucha has been specifically shown to aid healthy liver function and detoxification, balance blood sugar and improve digestion…]

[…Russian scientists discovered that entire regions of their vast country were seemingly immune to cancer and hypothesized that the kombucha, called “tea kvass” there, was the cause. So, they began a series of experiments which not only verified the hypothesis, but began to pinpoint exactly what it is within kombucha which was so beneficial…Kombucha is very high in Glucaric acid, and recent studies have shown that glucaric acid helps prevent cancer. I know 2 people in my immediate circle of friends who have had cancer (pancreatic and breast) and fought it into remission without any chemo or radiation therapy…Next, there’s all the benefits of the glucosamines it contains, such as preventing or treating all forms of arthritis…]

And Patty at Loving Our Guts provided the inspiration that led to the post you are currently reading. Using it as an acute remedy for her family’s ills made me hightail it into the kitchen and pour a drink for Katie and myself. My four year old knows the good stuff!

We’re both feeling unwell from veering too far off our diet lately or a weird bug that has descended on my house, and I completely forgot about adding booch to our healing routine. I also use it for an energy boost and to obliterate sugar cravings.

It works every single time.

Want to brew it yourself? There are 3 ways to do it.

Now that you have your SCOBY, it’s time to brew!

Amy at Real Food Whole Health has a great video on how to make a batch of kombucha. Though it’s commonly brewed in a wide bowl, I use a 1/2 gallon mason jar. I keep it covered with an unbleached coffee filter secured by a rubber band to keep out possible bugs and ick floating in the air and then wrap a towel around it to keep it dark. I love the thick rubber bands that come on certain grocery store veggies like broccoli for my ferments.

If you are ready to go whole hog and want to learn everything you can about kombucha, hit up Google for more information that you could ever hope to keep in your head.

Do you have any kombucha resources that you feel are essential (your own or otherwise)?