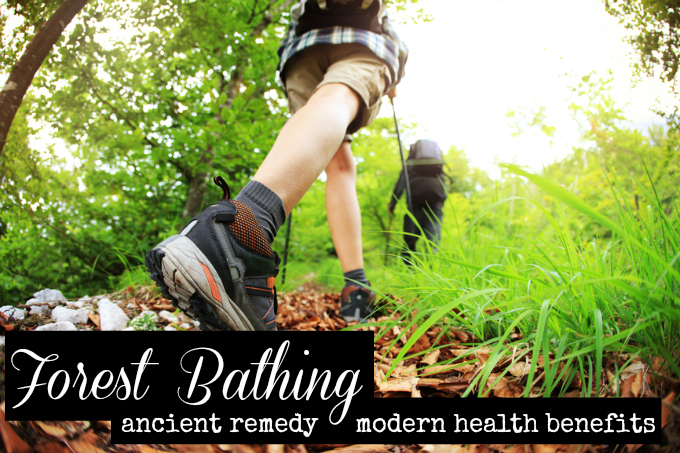 We All Need a Little Forest Bathing

Note from Jennifer: I’m excited to introduce you to our newest contributor at 20 something allergies. Paisley Hansen is a freelance writer who will stop by once a month to share some great new therapy ideas like this one…

While you may not have heard of the term shinrin-yoku, or forest bathing, the Forest Agency of Japan has prescribed ‘activities in the woods’ as a way to increase wellness and alleviate stress among their people.

If you’re like most people, a walk in the woods leaves you feeling peaceful, calm, and refreshed.

Researchers have also scientifically measured benefits from shinrin-yoku, making it one of the most perfect and inexpensive natural remedies in the world.

Most people intuitively perceive the benefits that come from spending time surrounded by nature.

Introduced in 1982, Dr. Qing Li, the foremost researcher in this field, quantified people’s perceptions in scientific studies that have been replicated and verified by other researchers all over the world.

The most obvious health benefit from forest bathing is a decrease in the production of cortisol, the stress hormone, when enveloped in the tranquility of rustling leaves, birdsong, babbling brooks, and fresh air.

Most exciting is Dr. Li’s recent discovery that inhaling the chemicals phytoncide, a-pinene, and limonene released by evergreens, stimulate the activity of Natural Killer (NK) cells produced by the immune system to destroy cancer cells.

Levels and activity of NKs increased up to 50 percent in some study participants.

According to Dr. Li, physical activity is not as important as the amount of time spent forest bathing.

A whole day scheduled for shinrin-yoku should include at least four hours in the woods; a half day, two hours.

Dr. Li recommends experiencing the forest with all five senses:

The greatest benefits come from choosing a three-day, two night trip in a cabin deep in one of Japan’s forests built to encourage forest bathing. 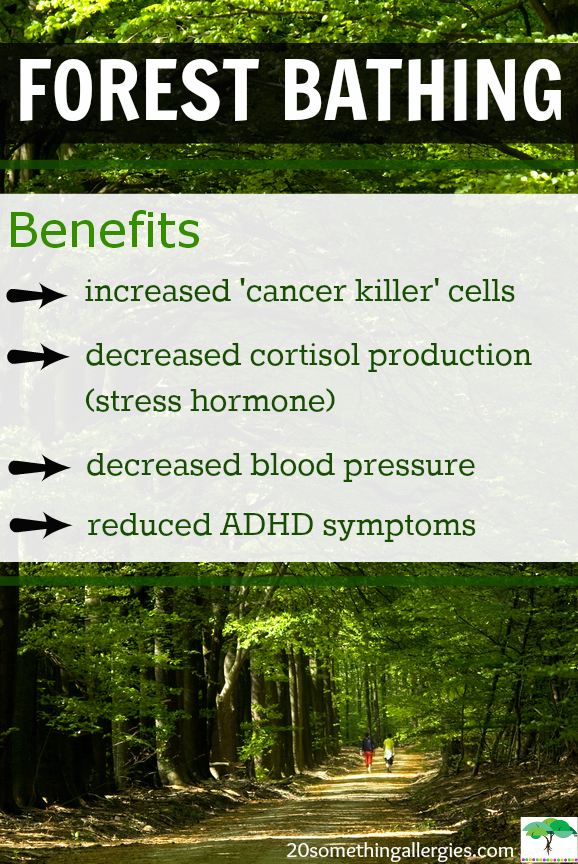 Japan rates at the top of the list of forest bathing destinations where 2.5 to 5 million people stroll along official Forest Therapy Trails. They hope to eventually increase the number of Forest Therapy Bases to 100.

South Korea committed to building its own National Forest Therapy Center, hoping to finish it in 2014.

Don’t worry about a lack of organized forest bathing venues. This natural remedy is found close to all of us.

Part of the fun is in locating forests and parks nearby that are large enough to drown out the chaos everyday life and have at least 30 percent canopy cover from the trees.

Most states list county, state, and national parks and forest areas in their promotional materials. Identify one most suited to your style and personality.

Staying in a cabin or campground close to others may be a good option for the night if you’re not a “roughing it” kind of person. Others have primitive camping areas or may allow you to pitch a tent deep in the forest, completely by yourself.

If you can’t get too far away, many cities have developed urban park areas, Take advantage of one of these during your lunch hour. Even though time is short, studies have shown that urban parks provide the same benefits as a longer experience—at least enough to get you through the rest of your work day.

Forest bathing—natural remedy, low cost, no side effects. What could be better? 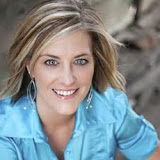 Paisley Hansen is a freelance writer and expert in health, fitness, beauty and fashion.

When she isn’t writing she can usually be found reading a good book or hitting the gym.