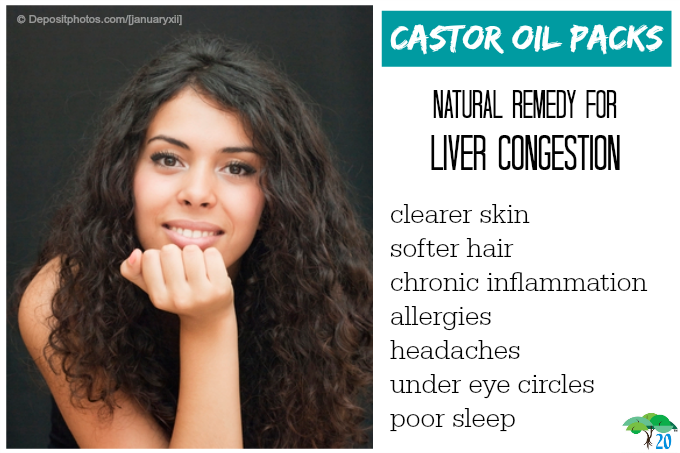 Once upon a time, I found a magic remedy that was easy for anyone to do and made me look like a superhero healer. It also made me feel like a million bucks and got rid of my dark under eye circles.

Though nobody with a chronic illness lives happily ever after with a single remedy, castor oil packs are still a super star to add to your toolbox.

Castor oil packs are one of my favorite remedies for clearing liver congestion, improving digestion, and boosting the immune system.

Note: Those with serious liver conditions or detoxification dysfunction should be monitored by a qualified holistic practitioner and given additional support. I also suggest avoiding them during pregnancy (should not overheat the abdomen) and breastfeeding (toxins are released into breast milk).

Liver congestion causes many symptoms that many of us deal with on a daily basis – allergies, acne, under eye circles and puffiness, histamine overload, and endocrine dysfunction (thyroid, adrenal, female or male sex hormones, etc.) to name a few -.

The castor bush (Recinus communis) grows in warm climates, and its oil is extracted from the spiky seed pods.

Part of what makes castor oil so unique is its fatty acid make-up. Ricinoleic acid makes up 90% of its composition.

Some uses of castor oil —

* This unsaturated hydroxy fatty acid, when ingested, binds to very specific receptors in the intestines and uterus, causing contractions and movement.

The Aztecs used it to treat hemorrhoids. The Chinese used it to induce childbirth and to expel the placenta. The beans were even found in Egyptian tombs.

Modern witch doctors can be sure this remedy is well steeped in history.

The Origin of Caster Oil Packs

So, how did castor oil packs for the liver start?

All roads seem to lead to a psychic, Edgar Cayce. He channeled the idea. Um, hmm.

If I hadn’t used them myself, I would have been a lot more skeptical. I had no idea until I started researching for this post.

A double-blind study published in The Journal of Naturopathic Medicine found that castor oil is an anti-toxin and enhances immunological function.

That one’s a little more up my alley.

Though I believe in psychic ability, I don’t use it as a scientific basis for healing remedies.

Using Cayce’s readings and through his own clinical studies, Dr. William McGrarey then wrote a book on the health benefits of castor oil, The Oil that Heals. (Amazon affiliate link)

That helped to spark today’s popularity with this remedy.

How Do Castor Oil Packs Work?

The idea is that these compresses, when used over the abdominal area and liver, help to rebuild and improve the function of the Peyer’s patches in the small intestine.

They also seem to directly clear liver congestion and have even been reported to dissolve gall stones.

The Peyer’s patches are lymphoid tissue located on the mucosal membrane. Very important in healing digestion and immune function.

When Dr. McGrarey performed case studies, the packs were found to be effective for illnesses that ranged from local infections to gall bladder issues and headaches.

Great, but how does it work?

It seems that nobody has been able to figure out exactly how castor oil packs work, but the current science focuses on the sedative effects and the action on the lymphatic system.

The oil allows the nervous system to switch into parasympathetic mode.

Once the switch from the sympathetic “fight or flight” system to the parasympathetic “rest and digest” system is made, something glorious happens: healing.

When the lymphatic tissue is congested (and that happens quite easily when we’re not well hydrated or moving frequently enough), it causes inflammation.

Castor oil packs also increase lymphocyte production and activity in the body and act as an important immune booster.

Lymphocytes, a type of white blood cell, help the body fight off viruses, fungal infections, bacteria, and even cancer.

Because we have lymphocytes in the epidermis, topical application can be very effective in stimulating the entire immune system.

Focusing again to the Peyer’s patches, Cayce believed they were responsible for the health of the complete nervous system.

He thought that the patches, when stimulated and functioning well, allow the sympathetic and parasympathetic systems to effectively communicate.

The abdomen was the focus of Cayce’s castor oil packs. It, particularly the solar plexus, has the largest concentration of autonomic nerve cells in the lower body.

The liver also contains one-third to one-half of the body’s lymph.

How to Do a Castor Oil Pack 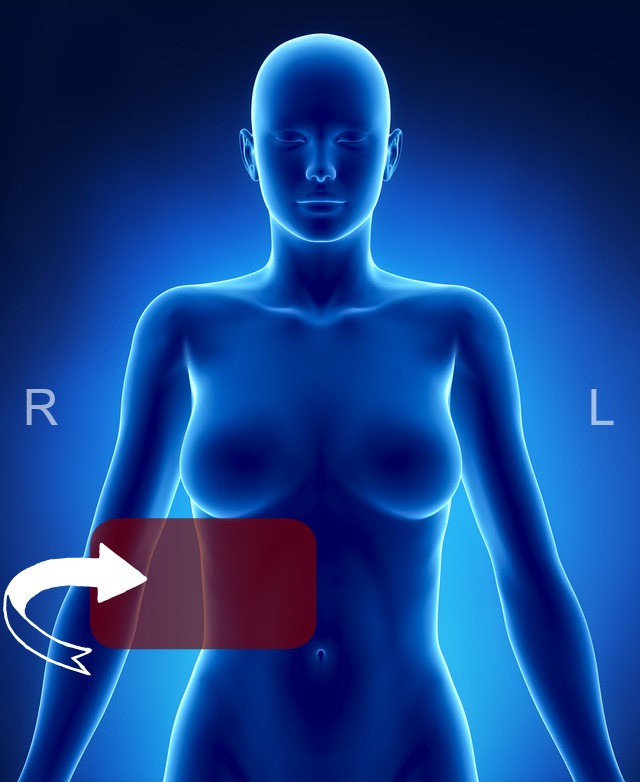 Testimonial from my practice:

I’ve known about castor oil all my life. I’m from Haiti where the plant grows absolutely everywhere with some of them looking more like trees than bushes.

The seeds make a popping sound when they ripen and explode.

The oil is used extensively for all skin issues and as a scalp massaging conditioner.

“Lwil maskriti”, as it’s known in Kreyol, is almost always around in a household.

Castor oil packs were new to me. I first learned about them from Susun Weed, master herbalist, and I used them for congested breast tissue with great results.

I’ve been using the castor oil packs for my liver now for about a month.

I have had chronic insomnia and horrible systemic inflammation because of my fibromyalgia.

I’ve, of course, removed the allergens from my diet through Jennifer’s guidance and have added the packs as a daily therapy.

The packs are part of my bedtime ritual. The heating of the water, the pouring into my hot water bottle, the application of the oil to the flannel cloth…it’s a grounding, relaxing process in itself.

When I settle into bed, lying on my left side and snuggle up with the castor oiled flannel and feel the heat start to penetrate my skin, I feel so cozy!

Within about 5-10 minutes, I can feel my liver warming up and there’s almost a ‘pop’ as the oil penetrates. Then, I feel my digestion kick in. Then, I get…..sleepy…oh, yippee, SLEEPY!

That’s the one thing I wasn’t really expecting was how much these packs would improve my sleep.

The muscle and joint pain have almost completely disappeared. 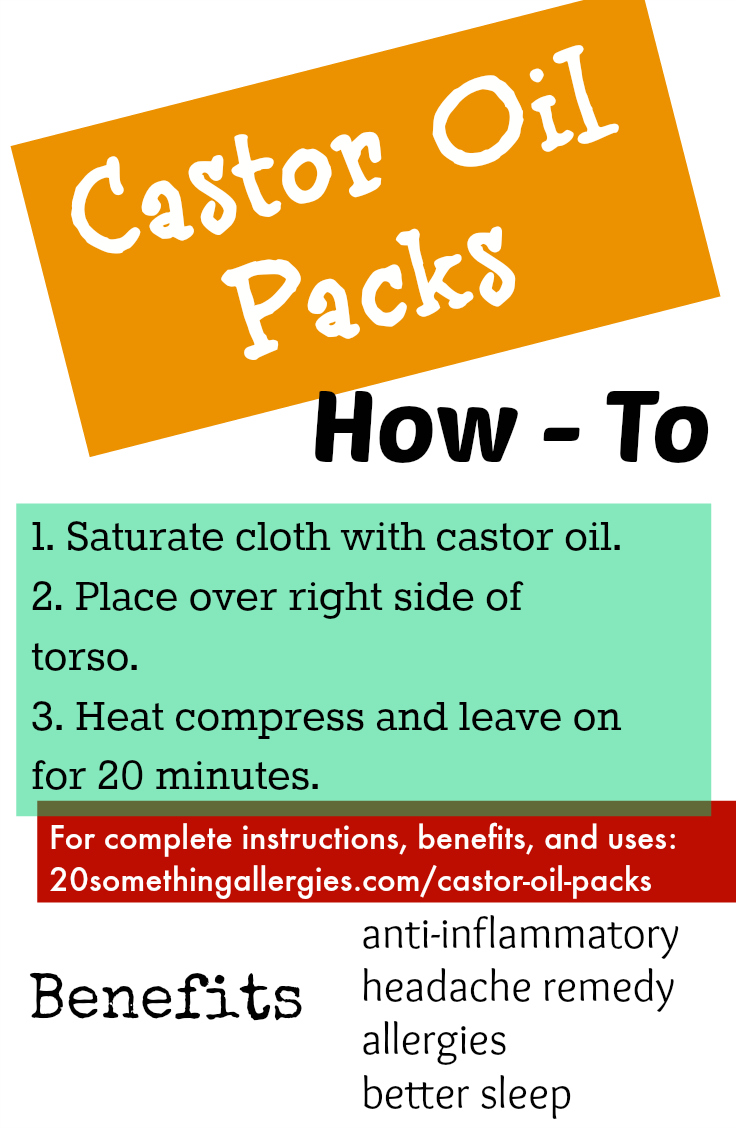